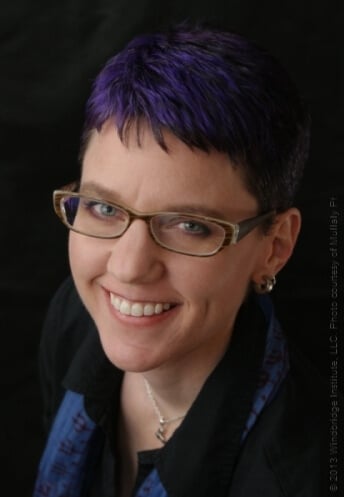 Dr. Julie Beischel, Co-founder and Director of Research at the Windbridge Institute for Applied Research in Human Potential in Tucson, Arizona, forfeited a potentially lucrative career in the pharmaceutical industry to pursue rigorous scientific research of consciousness with psychic mediums full-time.

Dr Beischel received her doctorate in pharmacology and toxicology from the University of Arizona and is currently a member of the Society for Scientific Exploration and a member of the science advisory board of the Rhine Research Center. She has a number of peer-reviewed articles published in scientific journals. Her academic training in several scientific disciplines allows her to apply traditional research methods to the study of consciousness and survival after death.

More than a decade later Dr Beischel stands as a world leader in mediumship research and I was lucky enough to catch up with this trail blazing lady in January 2016 just after the publication of her latest book: Investigating Mediums (available on amazon and whole heartedly recommended) which gathers together all her ground breaking research to date on mediums at the Windbridge Institute. It really is a must read.

What was the catalyst for your decision to investigate mediums?

As long as I can remember science has been my life but at first it was very much science in the traditional way. I didn’t really know much about the work of mediums until I was 24 and my mother committed suicide. From that moment on I started to ask serious and profound questions about the existence of an afterlife and eventually these questions became my primary focus. After I completed my PhD in 2003 I was able to start my research in earnest. It wasn’t long before I found out that there was just too much data out there to dismiss and it needed to be investigated properly but science wasn’t really addressing it. I knew that this was what I was meant to do so I didn’t pursue a career in the pharmaceutical industry and focused on applying the same scientific method and standards of research to mediumship as are used in drug trials and in other fields of research.

Please tell me about the research programs currently taking place at Windbridge?

When my husband and research partner Mark Boccuzzi and I decided to set up our own independent research institution we knew that the following questions would be our primary focus: What can we do with the potential that exists within our bodies, minds and spirits? Can we heal ourselves and others? Can we affect events and physical reality with our thoughts? Can we know things before they happen? Are we connected to each other? To the planet? And our main question right now, can we communicate with loved ones who have passed?

Why the name Windbridge? Is there any special meaning there?

Bridge, of course, references the role of the medium as an intermediary between earth and the afterlife and the word ‘wind’ suggests something that is real and powerful but cannot be seen. Put the two together and you have a name that sums up what we are trying to do.

Is it possible for you to summarise your mediumship findings to date?

Like with most research topics, more work needs to be done but at present our data collected under blinded conditions demonstrates that some mediums can demonstrate anomalous information reception (or AIR). In other words, they have the ability to report accurate and detailed information about a deceased person without any prior knowledge of that person, or about the sitter, the living person wanting to hear from their loved one. Because the medium doesn’t interact with the sitter during our research readings, there is no possibility for cold reading. It is possible, of course, they could be using telepathy to read another person’s mind to obtain that information, but for us at the Windbridge Institute that phenomenon is equally compelling and worthy of research.

What is your current focus?

It remains survival research but we are also very interested in the practical social applications of mediumship readings, specifically how they might be therapeutic for the grieving. In the 1950s, the advice the bereaved were given was ‘just get over it’ but that didn’t seem to alleviate any suffering and by the 1980s the ‘continuing bonds’ model of grief was developed in which the goal is to recognize that your bond with the person you’ve lost continues just in a different form. Our research is directly in line with that model and is focused on examining the potential effects (positive, negative, or neither) of readings from credentialed mediums on the bereaved. Anecdotal data implies that consulting a medium can have a positive therapeutic effect but we’ll need funding to perform a larger study on this topic to really be able to answer that question.

Investigating the possibility of survival after death must make you a bit of an enigma as far as the scientific community is concerned. How do they regard you?

In the late 1800s a number of researchers did pursue survival research but because most research being done today in any field is funded by government or private foundation grants and there are no government and very few private grants supporting survival research, very few researchers can pursue these investigations if they want to be able to pay rent and eat. Also, I think most scientists are afraid they will be labelled unscientific if they even consider researching the possibility of life after death. It is tough for me right now because if I announced that I have data which demonstrates mediums can report accurate information about deceased people with no feedback or prior knowledge of them, I would be viewed in a very negative light even though I am doing nothing more than reporting my findings. Scientists in other fields do not often find themselves in this position.

Okay, do you believe in life after death?

As a scientist, it is not my job to believe. It is my job to design studies that control for alternative explanations, collect data, and draw conclusions based on that data and the data from other scientists collected on similar topics. Taking into account the data collected to date about mediums, near-death experiences, out-of-body experiences, etc., I can conclude that the survival of consciousness after physical death (‘life after death’) is the theory that best explains all of that data.

How are mediums selected and tested in your research?

A journal article I wrote (summarized on our website) explains the complex process but each of the mediums on our team went through a rigorous, 8-step screening, testing, and training procedure during which they demonstrated being able to report accurate and specific information about the deceased under controlled conditions that prevent fraud. They agree to standards of conduct including not giving readings unless specifically requested and they volunteer their time for research. We screened our team as part of a specific grant and are no longer screening new mediums.

Do you use data from celebrity mediums?

No, just because a medium has chosen to make a career out of their gift does not make them any more interesting to us because they are just one medium, which science can dismiss as a fluke. We are interested in collecting data from numerous mediums so it can be used as evidence of a widespread phenomenon or ability.

Individuals don’t interest us as it is the combination of all the readings and data that provide the greatest evidence for a scientist. It is the power of witnessing many mediums reporting accurate and specific information about a dead person under strict scientific guidelines.

Do you think the possibility of survival after death will ever be accepted by mainstream science?

Anything is possible so perhaps one day but right now we have a long way to go even though the majority of the public already believes in life after death. In some respects this doesn’t concern me as I know that change always happen in the fringes or edges and never in the mainstream and right now my primary focus is on how survival research can serve society and ease the grieving process.

How do you respond to criticism from skeptics?

Most skeptics aren’t truly skeptics because a skeptic keeps an open mind but the people who criticize what we do and say all mediums are frauds have closed their mind to any new information. I call them deniers. They are denying that there is all this data out there and refuse to even look at it. It is like the sky has turned red and everyone can see that but they keep their eyes and head down and insist the sky is blue.

People are having these experiences and science needs to address them. No matter how hard skeptics scream about how these experiences are impossible, they cannot drown out the people that continue to have them every day. That is why I find what they have to say useless.

In addition, the quintuple-blind protocol we use at the Windbridge Institute eliminates all the explanations that a skeptic may claim are responsible for a medium’s apparent accuracy: fraud, experimenter cueing, information so general it could apply to anyone, rater bias, and ‘cold reading’ (a situation in which a medium uses cues from a present sitter to fabricate an ‘accurate’ reading). The readings take place on the phone between a medium and a blinded experimenter; sitters do not hear the readings as they take place and they later score blinded transcripts.

However, although skeptics can make our life harder than it need be, by far the biggest obstacle for us is not criticism from skeptics but funding. Survival of consciousness is not an area of research funded by any government grants or by any but a handful of private foundations. The research we do here at Windbridge is important and socially relevant but we can’t make as much progress as we would like because we can’t afford the necessary equipment and personnel to perform the types and number of studies we’d like to do.

How can people get involved with the Windbridge Institute?

If you feel inspired, you can also make a small monthly pledge via our Patreon program https://www.patreon.com/windbridge. Becoming a Windbridge Institute Patron is a wonderful way to become part of the Windbridge family and support our important research.